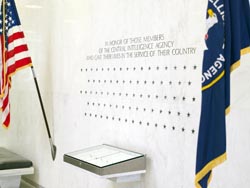 A suicide bomber killed seven CIA officers and one Jordanian officer at a remote base in southeastern Afghanistan on December 30, 2009 after posing as a potential informant reporting on Al Qaeda. Seven new stars will be etched onto the memorial wall at the CIA where every star represents grieving friends, family and colleagues dedicated to fight against the enemy, forever in their name.